Artificial Axon: Action potentials are the voltage spikes generated by neurons, through a low dissipation mechanism based on ionic currents and molecular switches (voltage gated ion channels). Action potentials form the machine language of the brain. With the Artificial Axon, we extract the action potential out of the neuron and into a synthetic setting, using the same molecular components. Think of taking fire out of the forest and into the cave. You can see a simple application by watching the movie.  Read more. 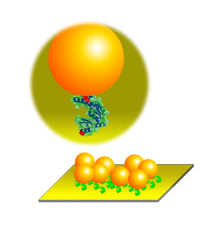 Viscoelastic Enzyme: Different materials can be grouped according to their mechanical properties.

With this experiment, we discovered that enzymes are viscoelastic. It means the dynamical response is elastic at high frequencies and resembles a viscous flow at low frequencies.  Read more. 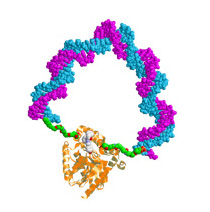 There are approximately 104 known different enzymatic reactions; each one can in principle be thus subjected to molecular control!  Read more. 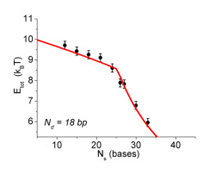 Bifurcations and nonlinearity with macromolecules: Compact macromolecules such as enzymes display unusual mechanical properties. They are interesting materials.

For example, the individual molecule is a “self-healing” chunk of matter which can "fracture" and re-assemble reversibly.  Read more.

The shape of clouds: The question that interests us is what aspects of the cloud can be understood simply in terms of the coherent structures in the flow field. This is a question one can ask of many turbulent systems, and the answer in this case is the shape of the cloud.   Read more. 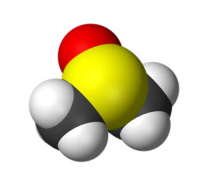